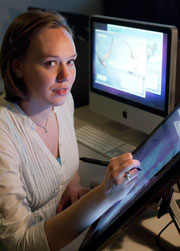 Schmidt, 27, has done scientific illustrations for several museums. But the recent publishing of Simon & Schuster’s “Dinosaur Discovery: Everything You Need to be a Paleontologist,” her first illustrated children’s book, is the best specimen in her collection of work. The educational book has over 25 interactive experiments showing children the basics of paleontology.

Hard work, foresight and a lifelong interest in science and nature came together to position Schmidt to illustrate “Dinosaur Discovery.”

Her career as a scientific illustrator began in a gallery in Portage, where she lives. It was then recommended to her that she do work for the Burpee Museum of Natural History in Rockford, Ill., and she created several illustrations for the museum. She also created a large exhibit mural for the Royal Tyrrell Museum in Alberta, Canada.

Fast forward to a paleontological convention in Texas, where the author of “Dinosaur Discovery” took a sample of her work.

Schmidt said she couldn’t believe it when she was later contacted by Simon & Schuster to illustrate the book, and that seeing it in bookstores is “really exciting.” 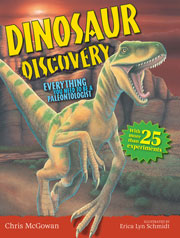 “Learning how to conceptualize and plan out your ideas is very useful,” she said.

A storybook illustration class with Grauert also aided Schmidt in the process of creating the book.

“Even though it’s different than what I’ve done, going through the process of finding out what goes into a book is very helpful,” she said.

Schmidt gained more from MIAD than technique and understanding. Her husband, Anthony Schmidt, is a ’05 MIAD Illustration graduate. Expecting her first child has inspired her to consider branching out her work to additional children’s publications and children’s fiction.

Schmidt is also branching out in other ways. Her paleontological illustrations have given her the opportunity to talk to young children and young aspiring artists art as a career. Schmidt spoke to students from 17 high schools at the Trailways Art Conference about the profession and her experiences, and she hopes to do the same with children.

“I’m really trying to reach out to youth in the community,” Schmidt said. “Trying to be an artist can be really daunting. But if you work hard enough, stay focused and don’t give up, you can make it happen.”

In the meantime, she’s particularly excited about her illustrations of a dinosaur skull for a newly discovered species named Willo. Once published, the illustrations will serve as the species’ reference illustrations. 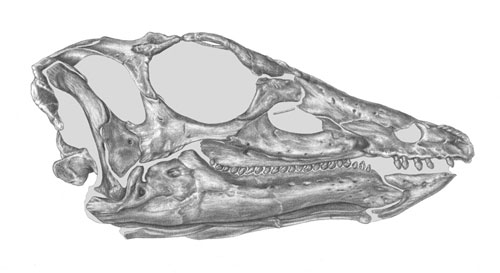