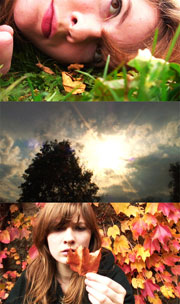 Sophomores in Time-Based Media Professor Jamal Currie’s Video 1 class and the Portrait Society Gallery forged a mutually beneficial relationship for the new exhibition “Giotto’s Eyes.” Students learned new perspectives from the opportunity to exhibit work in a well-known Milwaukee gallery, while the exhibition benefited from the student work, which complemented the other two exhibitions in the show.

“I think it’s exciting and encouraging,” Andrea Fritz ’14 (Time-Based Media: Animation major, Drawing minor) said of exhibiting outside of the college. “I’m used to the class format, make work, show it to class and have them critique it. But now we’re putting our work out into the public. I was a little more aware of things that I don’t usually consider. I was thinking about the type of audience we’re presenting it to.”

MIAD Art History faculty and Portrait Society Gallery Director Deb Brehmer invited the class to create a three-channel video installation in conjunction with two other exhibitions for “Giotto’s Eyes.” The exhibitions were united in their themes relating to the Renaissance painter Giotto. The show opened at the Portrait Society Gallery on Friday, December 2, 2011 and ran through Saturday, January 14, 2012.

Some students focused on Giotto and his works, while others created videos portraying scenes of sky and earth, as a parallel to Giotto’s reintroduction of sky and nature in religious painting during the 1300s, explained Brehmer.

Each student created three separate pieces that worked together cohesively. Their videos, which were looped by Currie to create the final product, played simultaneously on three projectors in a room dedicated to the MIAD students’ project.

“It turned out really well,” Fritz said. “Even though we all did our own separate takes, they flow together. They transition in a way that would make sense to the audience. I thought it was beautiful.”

While the student work complemented the other two exhibitions, the project provided an integral component to coursework.

“We all got something new out of it, some new skill,” Michael Dent ’14 (Communication Design major, Time-Based Media: Video minor) said. “I don’t usually work in experimental mediums. The challenge was refreshing.”

Fritz grew in confidence through the class. She has learned a lot about the Time-Based Media program, which has reinforced her plans about her future career path in animation.

“Jamal has been making sure that we’ve been exposed to different things,” Fritz said. “He thought the whole installation project was a great opportunity for his students. I really appreciated that he would trust us with a live gallery, and to take hold of opportunities like that.”

The student work accompanied an exhibition of paintings and drawings by Jean Roberts Guequierre, a Milwaukee-based artist. Guequierre, who often looks to historical figures for her work, created portraits of faces taken from Giotto’s frescoes.

A third show, called “Everyday,” included the works of thirteen artists or photographers who were invited to seek out the mundane and shoot images in a single day. Artists that participated in this show include MIAD faculty and staff members Robert Smith, Chair of Fine Arts; Annushka Peck, Foundations faculty; and Tara Bogart, Photography Lab Technician. 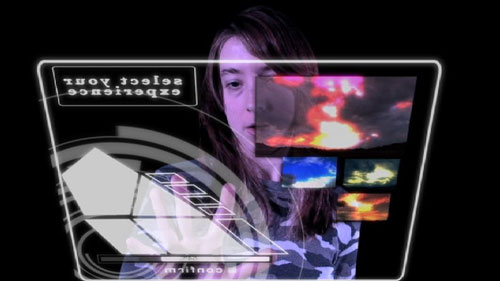 Top image: An image from Andrea Fritz’s contribution to the video installation.
Bottom image: A still from Michael Dent’s portion of the video.