Milwaukee one of America’s top ArtPlaces

ArtPlace, a collaboration of leading national and regional foundations, banks and federal agencies, named Milwaukee one of America’s Top 12 ArtPlaces for 2013.

Carol Coletta, director of ArtPlace, said America’s Top 12 ArtPlaces were identified through an analysis as “having been exceptionally successful in combining the arts, artists and venues for creativity and expression with independent businesses, restaurants and a walkable lifestyle to make vibrant neighborhoods.”

Milwaukee is the only city in the Midwest to make the list; with special recognition given to the Historic Third Ward, where MIAD is located, as a leading creative neighborhood. 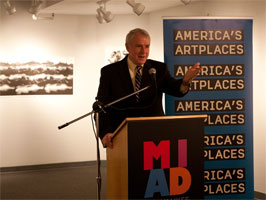 “This designation is a huge honor for the city, and will continue to help to bring the arts to the forefront of American culture,” said Mayor Tom Barrett, in accepting the designation from Coletta at a press conference held at MIAD on January 14.

The Mayor added that the city “is honored to have MIAD as a solid anchor of the Third Ward. You need only look around you to know that things are going very, very well at MIAD.”

“We have a jewel here in Milwaukee,” he said, “and it’s great to let people know what a gem we have.”

Referring to the Third Ward, the Mayor said, “People chose this part of the community and state to live and work, because creative people want to be among creative people. We will continue to see a strong demand for creative assets here.”

The press conference was held in MIAD’s Frederick Layton Gallery, site of the international exhibition, Makers In Print, on view Gallery Night January 18 – March 23. The exhibition is a central component of an international print conference, Print: MKE, to be co-hosted by MIAD and the University of Wisconsin-Milwaukee in March.