From living in Norway to stacking crates like Tetris blocks for a road-trip to New York, Alisa Toninato ’05 (Sculpture) is cooking up success, one iron pan handle at a time.

Her “Made in America” work, a collection of state-inspired cast-iron skillets, has received notice from across the country, including recent appearances in The Huffington Post and on the Martha Stewart Show.

What started as a waffle iron series during her Foundations year molded into a series of iconic state images as cast-iron skillets. Toninato’s waffle irons were initially a way for her to learn foundry work, and resulted from her view of creating utility in art. “The art was living in the experience that you put into the object that you make,” she said. 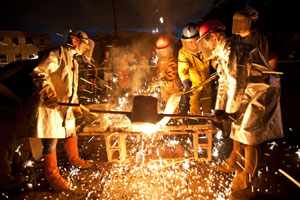 After completing a residency internship at the Franconia Sculpture Park in Minnesota and studying language and literature in Norway – something Toninato chose to do a few years after graduating – she returned to her studio in Milwaukee and “felt an insane connection to Wisconsin and Milwaukee.”

She kept thinking of the image of Wisconsin, describing it as iconic and bold, and thought, “This would be awesome as a cast-iron piece.”

Toninato says, “The skillets are funny and recognizable, and in the same vein as the waffle irons. I want people to use them – it’s something that can bridge the gap between elitist art crowd and regular people.”

It was only by chance that producers from the Martha Stewart Show found an image of “Made in America” posted on Toninato’s Etsy site, and offered her the chance to come to New York to be featured on the show.

“I was thrilled to do Martha Stewart, but it was such an effort!” 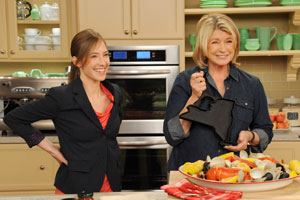 With a budget of zero to make the trip, Toninato decided she couldn’t afford not to pack it all up and go to New York, even if her only reasonable mode of transportation was a van with a dead battery and a hornet’s nest.

It was a glorified garage, packed to the brim, with each crate of skillets fitting so precisely that not even a piece of paper could squeeze between, but it was worth it.
Once on the set, television monitors in every room backstage were showing “Made in America.” Toninato describes it as a very surreal moment. “That kind of attention for an art piece is really, really special. It takes a lot to get people’s attention today.”

“Made in America” continues to open doors for her, including a commission to create the Canadian provinces, which brought her back to MIAD in search of advice. “I feel very comfortable going back to my professors and asking them about materials that they have a better grasp on,” she adds.

Between casting her skillets, making state patterns and taking on new projects, Toninato has a wide range of components to her work, but what’s her favorite part?

“Gettin’ dirty!” she exclaims. “I also really love giving the skillets away to people and hearing back from them on what they made. It’s just really thrilling to make stuff that people are using and want to share with others.” 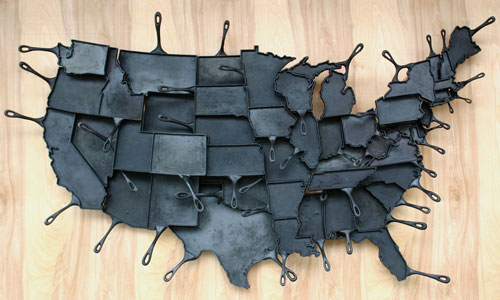