Visual Voice: From the Milwaukee Bucks to Brett Favre 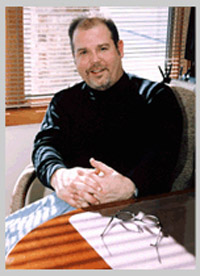 “I could not have done what I have accomplished over the years if it wasn’t for the relationships I developed during my time at MIAD.”

Q. What did you want to be when you grew up?

A. My parents and family really encouraged me since I was very young. I won a number of art contests starting when I was about 9, and then finally won a silver palette award from the Milwaukee Journal in 1978. I thought I had to do something with my art skills.

Q. What was your first memorable experience with art and design?

Q. How did your MIAD education affect where you are today?

A. I had two job lined up, had one a national art director’s award, and was student teaching typography by the time I was a senior at MIAD in 1983. I could not have done what I have accomplished over the years if it wasn’t for the relationships I developed during my time at MIAD. Becky and Fran Balistreri were instrumental in my career (as well as Mark Koerner, Steve Quinn, and Rick Thrun) and I still have great relationships with most of my former instructors even though we are sometimes competing for similar work. 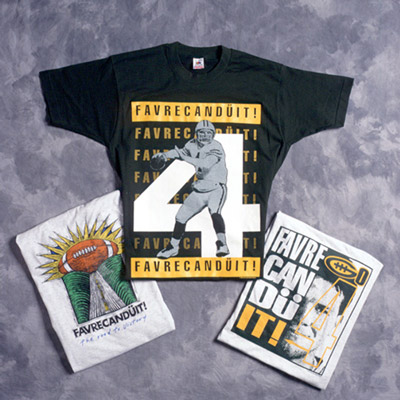 marketing pieces and apparel for the Brett Favre

Q. What was the most valuable thing you learned at MIAD?

A. What “professionals” are actually doing in their field.

Q.What’s the one thing you would tell a high school student who is considering attending MIAD now that you’ve experienced life after graduation?

A. Pick a mentor and do anything you can to hang around with that person in and out of school.

Q. What are your goals for the future, in art/design and in life?

A. I am living a lot of them right now and need to “retool” my career in the next four years. I have been a partner in a larger firm, I’ve worked with large companies and famous people including Brett Favre. I’ve started and been a partner in a number of different businesses. I waited a long time to get married and have children. Now, I have two kids and a new business and I get to see everybody grow up — including my design interns.

Q. What are some of your hobbies/interests?

A. Music: listening to, collecting, seeing and being in bands (I was in the obscure Rock Band “Couch Flambeau” from 1986-1994 with another MIAD alum, Jay Tiller). Other hobbies? Traveling, golf, bowling (got a 300 this year and I’m ready to retire from that game), painting, drawing, photography, and doing any and all of the above with my children. (re)Designing everything in the world as I look around.

A. I’ve done a lot of packaging and display design, and consulting for Bemis Toilet Seats which are on display at Home Depot. That’s not a bunch of crap either!

I’ve done sports marketing, and came up with the idea for the Brett Favre “Favrecanduit!” shirts/product line in 1992 after he won his first game. I signed the first marketing contract with him which was a three-year deal in ’92. Since then, I’ve worked with other players such as Santana Dotson, and former SuperBowl quarterback Brad Johnson.

I have been an artist invited to participate in the “Open Canvas” which raises funds for MIAD and the Eisner Museum of Advertising & Design. I have supported many other not-for-profit organizations, including serving on the board and as Board Chair for “ARTReach Milwaukee.” Recently, I was involved on the board of IndependenceFirst: A Resource for People with Disabilities, for seven years, and am now on retainer with them as a Brand/Marketing/Design Consultant.