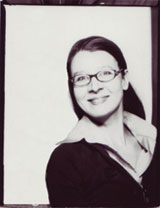 Associate Professor of Illustration Christiane Grauert was one of three winners for the Second American Batik Design Competition held by the Embassy of Indonesia in Washington, D.C., in cooperation with the Consulates General of Indonesia in New York, san Francisco, Chicago, Los Angeles and Houston.

Grauert’s winning design Many Faces Many Voices – selected by a panel of Indonesian and American batik experts – was based around the theme “The spirit of America in the heritage of batik.”

“The design Many Faces Many Voices originates from a metaphor often used to describe a central aspect of American history and culture,” said Grauert. “America as a melting pot of generations of immigrants from all over the world who came and are still coming to live peacefully and equally together.”

The winners were announced at a gala in Washington, D.C., which also marked the start of Indonesian Celebration Week. Winners received a two-week tour to batik centers in Indonesia, an opportunity to exhibit their work in Indonesia and the United States, and $7,000.