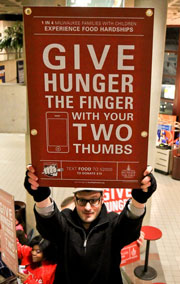 Bryan Padovano ’12 (Communication Design) and the rest of the OrangeAid interns asked Milwaukeeans to “give hunger the finger” and participate in FoodFightMKE.

OrangeAid is an internship program run by Jigsaw. The program assigns the students to come up with a topic they feel passionate about, and plan a campaign about it. Padovano and a group of three other interns came up with a “text to donate” promotion aimed at people in their 20s for the Hunger Task Force and named it FoodFightMKE.

“They’re not just trying to feed people. They’re trying to fix the problem,” Padovano said of the group’s decision to work with the Hunger Task Force.

A MIAD service learning course inspired Padovano to fight hunger. During summer, a representative from the Hunger Task Force spoke to Padovano’s class about the issue and how it affects Milwaukee. The internship project at OrangeAid seemed like a perfect place to engage the problem.

“The great thing about OrangeAid is that we work on our own projects, as long as the project helps the community. We brainstormed a bunch of possible ideas. ‘Hunger’ was the most important one,” Padovano said. “Our goal wasn’t just to make an ad campaign, but to impact the community in some way.”

A flash mob outside the Bradley Center before a Marquette basketball game kick started the campaign on November 11. A Hunger Task Force video played on the scoreboard before the game and the interns walked the concourses while promoting their program to the fans. 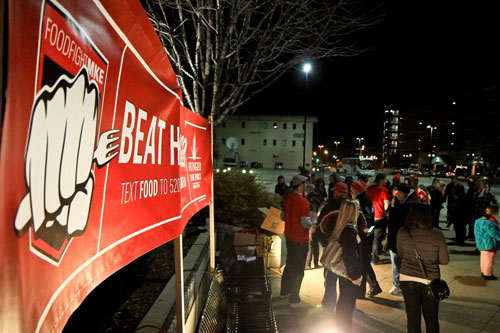 Several downtown bars participated in the campaign’s launch that evening by displaying coasters the OrangeAid interns created and distributed. The coasters boast an edgy sense of humor with lines like, “wake up with a pounding sense of accomplishment,” and “between 2 and 3 a.m., you’ll eat more food than some people will eat in a week.” Each of the coasters asks the patrons to text “FOOD” to 52000 to donate $10 to Hunger Task Force. Donors receive shirts from the interns that read “I gave hunger the finger.”

Jigsaw employees assisted with the project to ensure the interns’ work met the company’s standards and level of expertise, but the interns essentially had control over the campaign. Padovano worked on the print materials, which included posters, banners, business cards and the giveaway t-shirts. 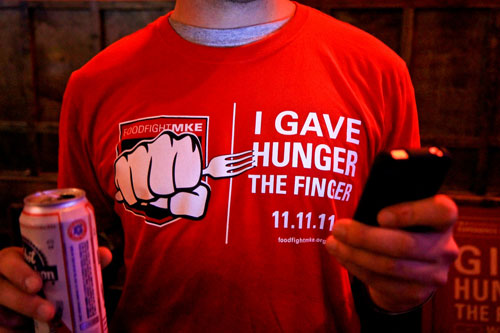 Click here to read about one of Padovano’s class projects being published in a national magazine.