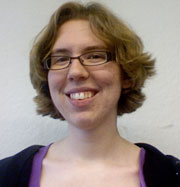 At MIAD’s 2011 Senior Thesis Exhibition, discovery was the resulting compound when Kaycie Dunlap ’11 (Time-Based Media: Animation) combined a molecule of art with a molecule of science.

Dunlap’s project consists of illustrations personifying the elements on the periodic table. Her project “Elements – Experiments in Character Design” grabbed the attention of Discovery World‘s executive director Paul Krajniak, a prominent visitor among the thousands who attend MIAD’s Senior Thesis Exhibition. Discovery World soon got in touch with Dunlap about arrangements and an interactive display featuring her characters was born.

“What stood out to them is that it is a way for people to see images and remember them,” said John Emmerich, Discovery World’s project manager and purchaser. “If you see her graphical representation, that’s something that you’ll remember.”

Dunlap’s characters are part of a two-screen digital display. Viewers see Dunlap’s illustrations on a large overhead screen after calling up the element from the periodic table on a smaller touch screen device. According to Emmerich, Discovery World exhibits evolve over time, instead of having specific end points. The plan is for Dunlap’s characters to continue evolving with the exhibit.

“I created them specifically as the embodiment of the elements,” Dunlap said of her character illustrations. “Several of them are based on real people.”

Dunlap based the design of arsenic and cadmium on her friends Alex Pratt ’11 (Illustration) and Lillian Duermeier ’11 (Illustration). Dunlap used some celebrity inspiration, too, using the lead singer from the band Queen, Freddie Mercury, as the basis for mercury. 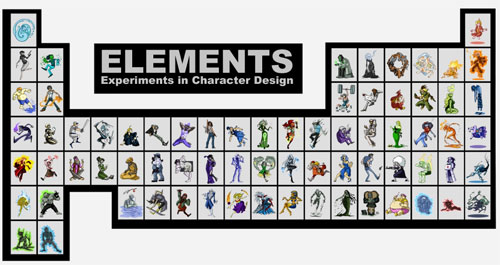 Silver is one of Dunlap’s favorite illustrations. The female characterization is an attractive woman conjuring electricity, playing off of the element’s traits, beauty and conductivity. Some of her characters have super-hero-like powers. For example, hydrogen has the power to control water. 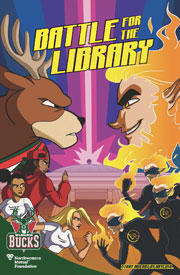 Dunlap, who currently does freelance illustration and character design work, is very thankful for the support she received from the faculty of the Time-Based Media and Illustration departments. She’s also grateful for the senior thesis show, which gave Discovery World the opportunity to see her work.

“I got a lot of feedback saying it was very educational,” Dunlap said. “I’m thinking about trying to market it as an educational tool.”

Earlier in the year, Dunlap worked on another educational project. Her work was selected by Northwestern Mutual and the Milwaukee Bucks to support the team’s 2011 Read to Achieve program and Reading Challenge with the Milwaukee County Library System.

She designed, illustrated and wrote the comic book, “Battle for the Library,” marking the feature debut of Bucks mascot Bango, who plays the central character fighting for literacy and the Milwaukee Public Library.

Click here to read more about “Battle for the Library.”