In the two weeks before the opening, Carrazana will create a site-specific installation – with help from MIAD students – as she recontextualizes propaganda into a performative piece.

This site-specific piece represents just one of the experimental, disruptive, mundane, playful and poetic works the diverse artists come together to create.

Meet the artists! View images of their work on flickr. 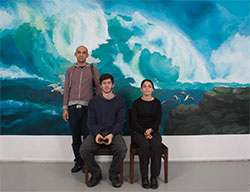 Trained initially as a painter in her native Cuba, Yaima Carrazana (born 1981) moves freely among various media, such as painting, video, performance and installation. Her wok stands out for the way it engages in a highly informed yet frequently irreverent dialogue with the history and discourse of contemporary art. Creating work that explores the unstable limits between what is considered art and what is not, Carrazana weaves a delicate web of commentary on the contexts – political, cultural, gender-based – that determine the way art is received and interpreted in today’s globalized art world. Her work has been exhibited across Europe, and in such countries as Japan and Israel. She currently lives and works in Amsterdam. 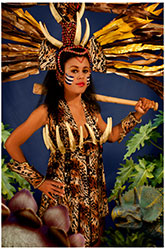 Alejandro A. Calzada Miranda, born in the old village of Remedios, Cuba in 1972, first studied art in Trinidad, and continued his studies at the Instituto Superior de Arte (ISA) in Havana, where he resides. His work is equally grounded in both fine art and stage design. Calzada Miranda owes much of his aesthetic to theater, most notably the role of theater in important community events, such as the celebration of Remedios. His awards include the Photography Scholarship Raúl Corrales in the Photo Library of Cuba, the Unesco Prize at the International Festival of Video Art Prize of Camagüey and Luis Da Camera Cascudo from Latino Parliament in Sao Paulo, Brazil. 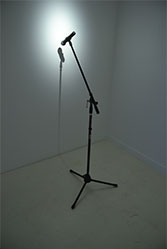 Since 1999, Felipe Dulzaides (born 1965) has been developing a body of work that investigates the cross-discipinary possibilities of video, photography, installation, drawing, performance, sculpture and public art. Dulzaides’ work is informed by ideas of post conceptualism, chance, perceptual poetry, urbanism, architecture and the psychological effect of cultural displacement and politics. It happens within the gap between the two contexts he moves across: the U.S. (he resides in San Francisco) and Cuba. Dulzaides is the recipient of prestigious awards such as the Rome Prize. His work is included in notable public and private art collections, and internationally featured at contemporary art galleries, museums, biennials and public spaces.

Glenda León (born 1976) is a visual artist based between Havana and Madrid. Her work expands from drawings to video art, including installation, objects and photography. She is interested in interstices between visible and invisible, sound and silence, and ephemeral and eternal. León has presented her work at an individual level at 2013’s 55th Venice Biennale, in France, in Montreal and across the U.S. and Europe. Events include the Glasgow International Festival of Contemporary Art (2006), the Havana Biennial (2003, 2006, 2009, 2012), and other group exhibitions in Brazil, Colombia, Austria, Spain, Italy, Australia, Holland, Portugal, Puerto Rico, Mexico and Nepal. Her work is housed in several permanent collections, and she has been the recipient of significant prizes and residencies.

First Person is curated by Chair of Foundations Lynn Tomaszewski and Associate Professor of Art History at St. Mary’s College of Maryland Cristin L. Cash, Ph. D. It is sponsored in party by the Mary L. Nohl Fund of the Greater Milwaukee Foundation. Gallery hours are Tuesday – Saturday, 10 a.m. – 5 p.m.