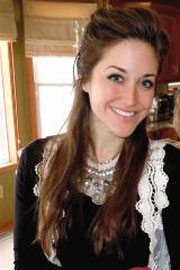 For Foundations student Kim Kennedy, being accepted into the international competition and exhibition ArtPrize was an exciting lesson in discovering, and pursuing, all possibilities for showing her work.

MIAD was well represented at ArtPrize in Grand Rapids, Mich., as Kennedy joined alums Alisa Toninato ’05 (Sculpture) and Erik Peterson ’10 (Sculpture) in this year’s competition, which ran through October 9.

ArtPrize is an international open art competition held annually in Grand Rapids at close to 200 venues. A public vote by contest attendees determined the competition’s top ten artist submissions. The prize winnings for all ten spots total $449,000. The first-prize winner received $250,000. All attendees over the age of 16 were eligible to vote.

The event’s mission is to “be a catalyst for collisions and connections between artists and communities, for the sake of infusing vitality and courage into culture.”

To participate in ArtPrize, artists must apply to venues in Grand Rapids. Stella’s Lounge accepted Kennedy’s application and showed her painting “The Mistress of Time” for the contest. Kennedy, who said she applied to many venues, was “thrilled” when her work was accepted by Stella’s.

Kennedy, 27, has participated in shows in Los Angeles, San Francisco and her native Ohio. She moved to Los Angeles to pursue a career in music, but a lifelong passion for art drew her toward a new career path. Kennedy explored art program offerings at different colleges, focusing on the West and Midwest. She determined MIAD to be the best fit and began classes this fall with an interest in drawing and painting. Kennedy says her status as a non-traditional student “hasn’t in any way affected her ability to bond with her peers.” 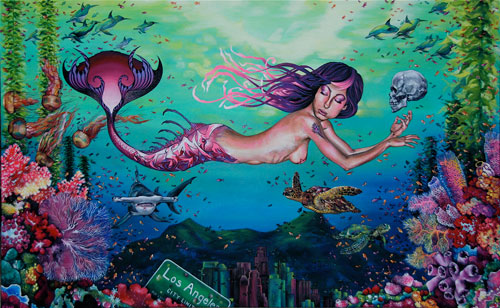 Toninato’s “Made in America,” a wall mounted set of custom-made wood and cast iron state-shaped skillets, hung at the Devos Place Convention Center and Performance Hall. The skillets come together to form the map of the United States. Toninato, 29, has exhibited at MIAD in the Brooks Stevens Gallery, the Harley-Davidson Museum, Soo Vac Gallery, Sloss Furnaces and Arts on Fire. Toninato, who lives in Madison, now works out of her own studio iron foundry.

Peterson showed his sculpture “Landscape,” which explores natural and manmade boundaries, at kate lewis ceramics. He has exhibited at galleries around the country including MIAD’s Fredrick Layton Gallery, the Hidden River Arts Festival, Transposed, Penn State, The North End and The Feed Store. Peterson, 31, has also been chosen as a finalist in the 2011 Niche awards. He lives in Empire, Mich.