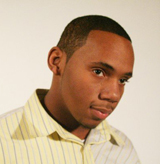 Communication Design alum Xavier Ruffin ’10 co-directed a music video that has more YouTube hits than a linebacker has sacks.

“Green and Yellow” pays tribute to the Green Bay Packers and features a remake of Wiz Kahlifa’s chart-topper “Black and Yellow.”

The video is unique because it was shot at Lambeau Field.  Jessica French (Communication Design ’07) secured permissions for Ruffin to film inside the stadium.  She also makes a cameo in the video.

“Green and Yellow” stars Milwaukee hip-hop artists Prophetic and Pizzle and is part of Ruffin’s growing music video portfolio, a passion he pursues in addition to his full-time job as a web designer at Kohl’s Creative.

In December, Prophetic collaborated with MIAD students for his video “Livin in the Sky.”

Students produced the video as part of an Art Direction course.  The class partnered with after-school organization Running Rebels, where they shot some of the footage.

The students also designed promotional posters for the video’s debut at MOCT.  Over 300 people attended the event.

“Livin in the Sky” has drawn national attention as a result of the nationwide “Green and Yellow” frenzy.  Both videos have been featured online and on-air.

But Ruffin’s not the only one putting Green Bay, and MIAD, on the map.

Like Ruffin, Desiree May ’10 is working to promote the Packers.  May is a graphic designer with Green Bay agency The Karma Group, whose clients include the Packer’s Pro Shop and G-Force.  Her current role involves web and print advertising for the Super Bowl.

Packer’s fan or not, MIAD alums are proud to be a part of the excitement.

To see “Livin in the Sky” posters, click here.

To read more about Ruffin’s student work as a CD major at MIAD, click here.

Livin in the Sky