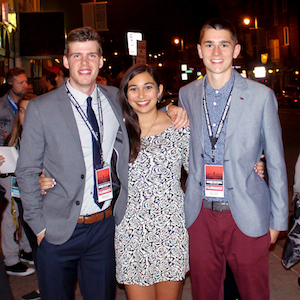 At the 2016 Milwaukee Film Festival Awards Brunch, James was awarded the grant which includes $5,000 in post-production services, legal consultation and $2,500 in cash for his feature film, Lunar Lords.

In 2015 he received $5,000 to develop the script for Lunar Lords. Immediately after graduating from MIAD with a degree in Time-Based Media, James began working on the script with help from Mallori Taylor ’15 (Time-Based Media: Animation) and Michael Bourne. They’ve spent the last year screenwriting, scouting locations and completing visual development.

James, Taylor and Bourne are making the kind of film they want to see: an animated, sci-fi action film. They’re also addressing some important societal issues in their work.

“It presents a subversive view of gender stereotypes and contains extremely complex roles for women of all backgrounds,” said James. “It also presents realistic LGBTQA characters and works to fight against harmful tropes.”

This Brico Forward Fund grant will allow them to make their vision a reality.

“Being that I am a young and independent filmmaker, having support makes all the difference. Winning the Brico grant two years in a row not only makes a huge difference financially, but it also helps to build credibility and confidence that we are making something special.”

As the Time-Based Media Lab Technician on campus, James continues to collaborate with MIAD students, which he considers crucial to the process. He also understands the value of his film education.

“Every skill I gained from my MIAD courses is being put to use on this film. MIAD did an excellent job challenging me to develop my skills and gain confidence to take on a project of this massive scale.”

Read about The Death Drive via Shepherd Express.