When Xavier Ruffin ’10 (Communication Design) sat down to engross himself in Mad Men, a show acclaimed by his design and advertising friends as well as audiences across the country, he noticed something was missing in the AMC drama. With all of its historical accuracies, Ruffin saw a glaring omission in the 1960s advertising world – African American advertising executives.

From an artist’s perspective, Ruffin understood why Mad Men creator Matt Weiner excluded African American representation, “That just wasn’t the picture he wanted to paint.” Including the “black element” would have changed the path of the story, which concentrates on Don Draper and the way white, privileged men maneuver through their “restricted”world.

But Ruffin just couldn’t shake the exclusion, as there were important African American ad executives during that era, including Georg Olden, who ironically designed the Clio award statuette that Mad Men’s Don Draper won. 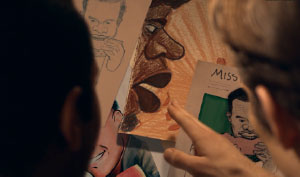 Mad Black Men focuses on three black admen working in the Mad Men era. The men are forced to work on racially insensitive ad campaigns under racially insensitive, white bosses, and learn how to satisfy their white clients without compromising too much of their own identity. This is made impossible by commands like: “I want you to make the lips and nose a lot bigger because right now our character isn’t black enough, and we really need the Negro community to identify with this picture.”

Three parts of the six-part first episode of Mad Black Men are currently available for viewing. Although Mad Black Men has already taken on a life of its own, Ruffin’s initial point remains the same: “There are, and were, black people in advertising. There isn’t a great amount of representation, but we do exist, and we are here.”