Opening on Saturday, January 28 with a reception from 2 – 4 p.m., the “Ten at Ten” exhibition showcases the future of Wisconsin art. The curatorial team selected artists at the start of their careers. “Expect great things from them over the next ten years,” says Executive Director of MOWA Laurie Winters in the press release.

Eduardo Zavala is grateful and excited to participate in the exhibition. “As I just graduated last May, … this opportunity is a great professional experience,” they say. Zavala’s artistic practice focuses on lens-based media and installation design, creating and reshaping queer realities and spaces using both natural and constructed materials. Their work for the MOWA exhibition relies on changes in the installation process for previously-constructed work. “I had initially shown my fiber pieces alongside live chia growing on dining chairs,” they explain. “However, due to the unpredictable nature of plants and mold I couldn’t use them.” 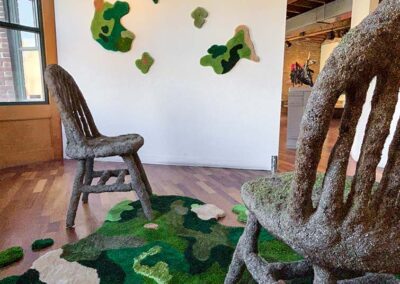 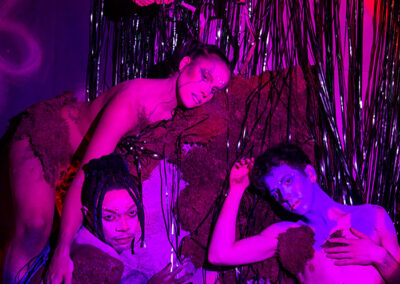 Still from “Foraging in the Garden of Queertopia.” Image courtesy of Eduardo Zavala. 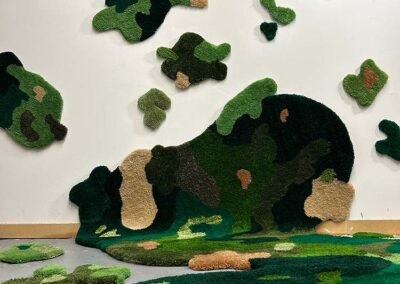 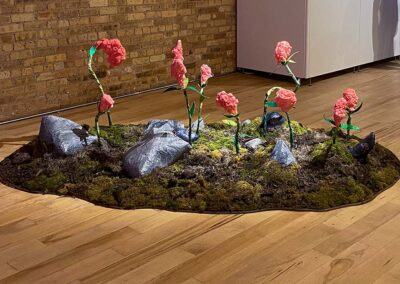 “I’m really fortunate to be coming out of school at a time when emerging artists are much more appreciated than they used to be and are considered for these kinds of opportunities,” says Lindsey Yeager, who is represented by Var Gallery. “I’m always looking to set the bar higher and higher, and I definitely need the support of my peers, galleries, and institutions in order to do that.” Yeager’s highly narrative art deals with themes of living in a deteriorating world and links society with nature. Planned out in great detail before she starts painting, Yeager loves “having tight plans and focusing on small negotiations once the image is on a wood panel.” 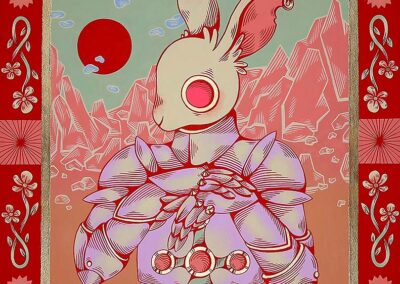 “No One Else Will.” Image courtesy of Lindsey Yeager and Var Gallery. 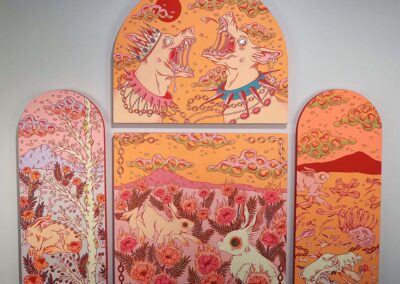 “Delusions of Grandeur Which Wrecked Us All.” Image courtesy of Lindsey Yeager and Var Gallery. 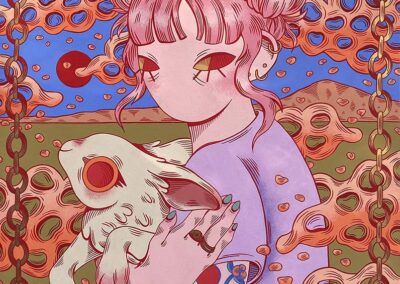 “How to Keep a Hare Alive.” Image courtesy of Lindsey Yeager and Var Gallery. 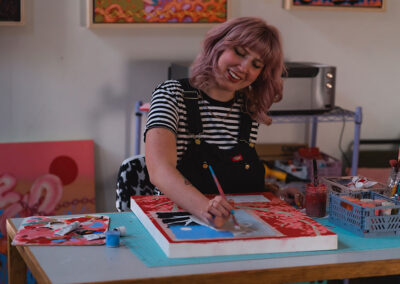 Lindsey Yeager in her studio. Photo by Alexandrea Lenz.

During their time at MIAD, Zavala appreciated real-world experience. “I think the opportunities to show work while at MIAD helped me prepare for what installing work would look like when outside of the educational space,” they continue. Zavala hopes other young creatives “take advantage of all the opportunities that present themselves in front of you.”

Yeager recognizes MIAD as instrumental in pushing her to reach out and create industry relationships. “It becomes your job to advocate for yourself–there are opportunities out there, but you need to be brave enough to go after them!” she explains. Working with galleries, museums and residencies as a student, in addition to one-on-one mentorship with professors prepared Yeager for large-scale exhibitions. She encourages current students to foster a healthy relationship with the studio, and reminds them that “being forced to reconsider who you are as an artist and as a person is also good.”

Support the artists at MOWA’s opening reception, keep up with Lindsey and Eduardo and learn more about MIAD’s NSP: Fine Arts and Illustration majors!