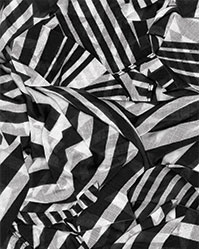 What started with a fire is still swimming along. MIAD’s collaborative student club, Swim Team, emerged from an independent study idea between Jenna Knapp ’14 and Nicholas Frank, core coordinator.

“After the fire in the union, it all started,” said Knapp. “The Erie Street Gallery was gone, which was a main student-run space.”

During her independent study with Frank, a program was established to create a floating exhibition. The independent study has dissolved since then and evolved into a club that is very active in creating a student-run space. 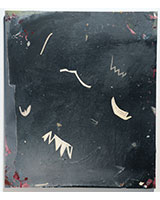 The name Swim Team cam from the notion that the group didn’t have a solidified location. “We were thinking that MIAD doesn’t have a sports team,” explained Knapp. “We live by a river, so we thought: Swim Team.”

“We started thinking of an exhibit with major art spots in the Midwest. Minneapolis and Chicago were big ones, and we realized Milwaukee’s role was to host these cities,” said Knapp. 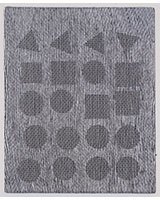 Swim Team alumni representative Monica Miller ’13 said the artists are “all emerging, if not established. We’re expanding the network Milwaukee has for people our age. I don’t know how often the MIAD community gets to see work from our contemporaries in a different city.”

The four artists were selected by location and media, each bringing their own perspective to the Milwaukee cultural landscape. The subject of two-dimensional form strikes a balance between painting and installation. A dialogue between space, texture, color, form and mark-making exemplifies the practices of artists who call the Midwest home.

Sheila Wagner and GraceMarie Keaton will be at the opening, Gallery Night, October 18, 5 – 9 p.m. The exhibition runs October 18 – November 16 in the Entrance Gallery.