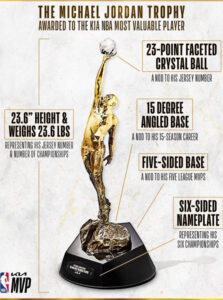 Milwaukee is fast becoming a national hotspot for basketball. Not only is the city home to NBA champions the Milwaukee Bucks, it recently played a pivotal role in creating the newly designed Michael Jordan Trophy, awarded to the Kia NBA Most Valuable Player of the year. Milwaukee’s Vanguard Sculpture Services, the “best fine art foundry on planet Earth,” according to their website, poured and cast the final trophy.

Michael Nolte ’81 (Sculpture) is a co-owner and foreman at Vanguard along with Beth Sahagian ’81 (Sculpture). The staff at the studio worked with Mark Smith, retired VP of Innovation Special Projects at the NBA and current Jordan Brand designer, to mold, cast and finish the trophy. “It’s our job as craftsmen, as a foundry, to faithfully reproduce and manage the transformation,” said Nolte in an interview with Wisconsin Public Radio. Vanguard made five total statues for the next five years of MVP awards.

“In my youth I was a big Michael Jordan and Chicago Bulls fan… but it’s Bucks or bust now!” says Shawn Stephany, who studied Drawing at Milwaukee Institute of Art & Design and currently works on the six-person team at Vanguard. The bronze award “has been so well thought out … the crew that made it really nailed their vision. It’s a pleasure to join something like that,” says Stephany.

Standing 23.6 inches tall and weighing 23.6 pounds, values that represent Jordan’s jersey number and the number of championships he won, the trophy includes many other nods to Jordan’s career. “Each artist has their own form [of] language … it is the job of the foundry to learn that language and speak it back in three-dimensional terms,” said Nolte on working closely with the NBA to meet the exact specifications of the design.

Milwaukeeans, as well as those further afield, might recognize the work of Vanguard Sculpture Services by way of the Bronze Fonz, as well as other well-loved statues and art along the Riverwalk like Gertie the Duck. As for the MVP trophy, Nolte and Stephany hope it stays local and in the hands of Milwaukee legend Giannis Antetokounmpo.

Read more about the project on WPR and Milwaukee Record, keep up with Vanguard Sculpture Services and learn more about MIAD’s NSP: Fine Arts Major.