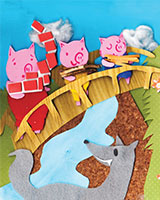 “While working for First Stage I had two things in mind: first, of course, to be aware of the needs of the client, but second to create the kind of image that I wanted to see. After all, if I don’t like it I can’t expect anyone else to.” – Raven Krupnow ’15 (Illustration)

For the fourth year, advanced students of Associate Professor Christiane Grauert’s Illustration IV class collaborated with First Stage to create dynamic images to illustrate their 2014-2015 Season of Plays brochure. The class created a total of 105 works for the project, and 10 were selected for the brochure. 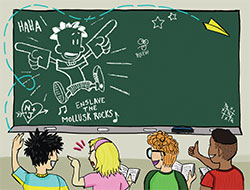 This year, audience reception inspired the First Stage illustrations, which will be seen by children who might be experiencing the theater for the first time. Mallori Taylor ’15 (Time-Based Media) illustrated “Big Nate: The Musical,” and set her illustration within a classroom in order to engage the appropriate age group.

Jacqueline Peetz ’15 (Illustration) created “Stiles & Drewe’s The Three Little Pigs and Goldilocks & the Three Bears” illustrations to resemble sensory books for children that play with color and texture. Peetz was also careful to fashion her scarier characters as playful schemers to be sensitive even to her youngest audience.

Students whose works were selected for the interior are: