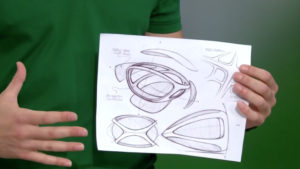 January 11, 2019 … Evan Hoffman ’16 (Industrial Design) has won Wilson Golf’s “Driver vs. Driver 2” competition on the Golf Channel with the Cortex driver design. His design was one of 14 competing for the top prize of $250,000 and the opportunity to have the club produced, marketed and sold by Wilson Golf.

“When I designed this thing last May, it was just for fun,” said Hoffman at a watch party for the TV show last November. “My career trajectory is on its way up and I’m very excited to see what happens with that.”

Hoffman’s driver is now on sale at 1,000 retail stores worldwide as well as online. It retails for $499. Professionals will begin using the club on the PGA Tour next year.

During the show, the designs of each participant went through a process where they were tested and refined by Wilson staff. PGA pros also tested the club. 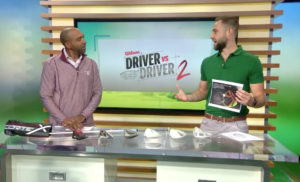 “That [the design process and iterations it went through] was the hardest part of the process because it changed so much,” Hoffman said in an interview with the San Diego Union-Tribune. “But that whole process was essential. I had open ears, but I went with the suggestions that the Wilson team gave me. Whenever they told me to do something, I’d do it.”

Hoffman added, “The technology changed along the way but the Wilson team and myself are very proud that we did stick to the principles of my main concept.”

“I think the average consumer is going to have what we call a wow experience, where you’re going to hit it and you’re going to see some numbers and ball speeds maybe you haven’t seen,” said Tim Clarke, president of Wilson Golf at the conclusion of the TV show. “This has 44 percent carbon fiber. It’s our largest carbon fiber design ever in a driver and we’ve got this one with the weight all in the right place. It’s very adjustable, modifiable for all sorts of flights and correction activity.”

Hoffman is originally from Wisconsin and currently lives in the San Diego area.

Read more about Hoffman’s design on Golf.com, or see video clips of his win and him describing his design process.