Receiving feedback from outside professionals has a major impact on how students present their ideas and then execute the final project. 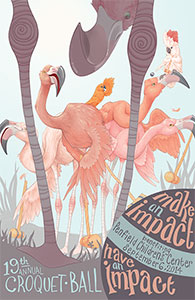 Cramer-Krasselt’s slogan states they want to “make friends, not ads.” They succeeding by connecting MIAD’s talent with Penfield Children’s Center, and creating an ongoing collaboration between the non-profits.

The agency acts as art director for the Illustration students during their creation process, showing each student how to apply the skills they learn in the classroom to real-world experiences.

The class created a total of 30 posters for the project, and the top four were selected for auction during the black-tie ball to benefit Penfield Children’s Center. This year, the third-place illustration created by Aubrey Lewis ’15 (Illustration) will be used for promotional purposes and the event invitation.

<Madeline Dall ’15 (Illustration) won first place for her poster design, and found herself attracted to the “awkward” shape of flamingos, stating that she could manipulate their forms into a vibrant composition that would “appeal to both kids and adults.” 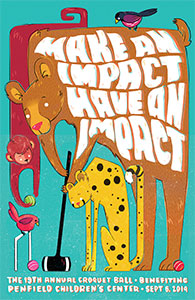