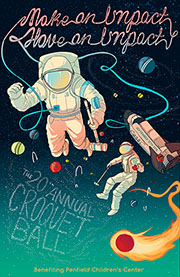 MIAD students are not average students; they are creative professionals, using their creative talents in the Milwaukee community.

Throughout the design process, Cramer-Krasselt acts as art director for the students, helping them utilize their skills to create the finished product.

Some students took inspiration from their past when creating the designs, “When I was designing posters for Penfield, I looked toward my childhood for inspiration. It wasn’t based on a moment or place, but rather a feeling of admiration and wonder for the world around us,” said Catelin Tindall ’16 (Illustration).

Sage Kossman ’16 (Illustration) added, “The entire time I knew I wanted to address the more whimsical idea of childhood, and the idea that Penfield was a larger being, helping the small (children), through croquet.”