Illustrating for the (First) stage 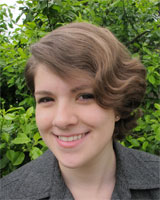 When is “pinkititis” – the eating of too many pink cupcakes – a good thing?

When it’s the inspiration for an award-winning design for the cover of First Stage’s 2012-2013 Season of Plays brochure and the musical Pinkalicious, in which Pinkalicious Pinkerton develops the malady.

“I wanted a simple concept so I could focus on the color and texture used,” said Katelyn Kolis-Bowler ’13, the Illustration major whose design will also be used inside the brochure.

“The cupcakes were really my inspiration because [the character] ends up eating so many, so there was a lot I could play around with,” she explained. 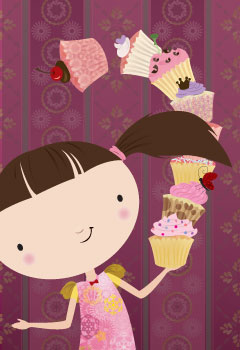 Kolis-Bowler was one of nine students from several majors in Associate Professor Christiane Grauert’s Illustration III class whose works were selected as part of a class competition judged by the marketing, artistic and managing directors at First Stage. The class created a total of 87 works for the project.

Integrated Studio Arts major Haley Eichenbaum’s (’13) illustration for Big the Musical was also selected to be a cover design.

Jeff Frank, Artistic Director at First Stage, said working with MIAD students was a delight. “I found them to be not only great young artists, but great listeners. Their work was inspiring.”

The students’ challenge, he said, was “to capture the essence and emotion of the play. [We needed] vibrant images that an audience member would find compelling, images that tell a story – because that is what we do.”

Leidecker’s illustration will also be used for a postcard mailing advertisement. All of the students’ works are on view at the Milwaukee Youth Arts Center, where First Stage is located and performs.