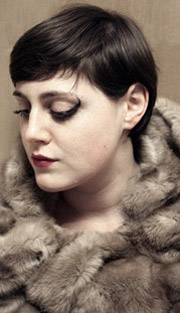 Danielle Rosen (Integrated Studio Arts ’11) believes artists and designers have "a responsibility to foster dialogue and questions." She now has an additional opportunity to do that, having been selected to curate Gallerie M as part of the gallery’s new partnership with MIAD.

Rosen was selected for the spring semester based on her long-term work as a member of the gallery crew for MIAD’s Brook Stevens and Frederick Layton galleries, and as an intern at local galleries such as the Dean Jensen Gallery and the Green Gallery East.

"Working as an intern at other galleries around the city has enabled my education to be immediately applied and built upon in ways that I didn’t anticipate," she said.

"My responsibilities are really different in this gallery. The other galleries had curators. Now I get to choose who comes in and how I want to talk about them."

Her first show, "Hyperbole," opened February 25. It features work by Kate Brandt and Pedro Vélez, in an exhibition Rosen described as "risky."

"I wanted to pair two artists who had never worked together and see them collaborate," Rosen said. "They deal with similar ideas in contradictory ways, and I wanted to see if that could function within an exhibition."

Rosen said she would continue to bring new programming to Milwaukee. Future exhibitions will feature diverse artists with varied backgrounds, which she hopes will prompt dialogue among Gallerie M’s wide audience.

"By working outside of conventional boundaries, you are able to push limits," Rosen said.

She’s also been able to do that through her Integrated Studio Arts major.

"I chose to be an ISA major because the way I work is very interdisciplinary and not media driven. Ideas and research are integral parts of the ISA experience."

The major has also allowed her to pursue her passion for performance art everyday, she said, both at the college, and as a professional for such Milwaukee groups as the Performance Art Showcase.

"Performance art is participatory in ways that other art forms are not. Adopting a practice that allows the audience to directly, sometimes viscerally, engage in a piece enables the work to be immediately enacted… [I]t is really challenging to me conceptually — every environmental, dialogic/textual, atmospheric component has to be calculated.

"I found that it was beneficial to work with many professors like Mark Anderson, David Martin and Jill Sebastian, among many others who were engaged in the form in varied ways… As an ISA major, I was able to be very self-directed and build my own curriculum as my practice grew or expanded into other forms."

Her most consuming and current art project — The Institute for Species Systemization — is her capstone senior thesis project. www.instituteforspeciessystemization.org

Rosen, a President’s Scholar, plans to attend graduate school in the Department of Visual Arts at the University of Chicago.

Read more about Rosen in OnMilwaukee.

Rosen said she would continue to bring new programming to Milwaukee. Future exhibitions, such as “Logical Construction,” opening March 25 with MIAD alumni Timothy Stoelting ’10 and Stevie Kinast ’10, will feature diverse artists with varied backgrounds, which she hopes will prompt dialogue among Gallerie M’s wide audience.