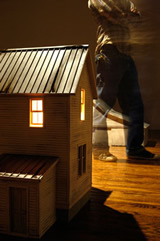 They were selected from among 132 applicants.

The husband/wife team has collaborated for seven years on site-specific, sculptural installations and performances. Their recent work, said McCaw, “focuses on realistic architectural miniatures using narrative and mood to transform a site.”

Both are also founding members of the WhiteBoxPainters, a performance art group specializing in public projects, such “The Tally” for My Vote Performs – a non-partisan Election Day project celebrating citizenship and the right to vote.

McCaw holds a master’s of fine arts from Cranbrook Academy of Art. Budsberg, who holds a bachelor of fine arts from the University of Wisconsin-Milwaukee, is a carpenter and musician who has also built numerous set pieces for the theatre/film industry.

The team’s recent exhibitions include “Escapisms” at Galerie Sans Nom in Moncton, New Brunswick, Canada; “Beloit and Vicinity” at the Wright Museum of Art in Beloit, for which they won first prize and a solo exhibition to be mounted in May; “Leading Edge” at the Northwestern Mutual Life Gallery at Cardinal Stritch University in Milwaukee; “Broken Down” at The Soap Factory in Minneapolis; “New Work/Emerging Artists” at UWM’s Inova; and the 2008 Faculty Exhibition at MIAD. 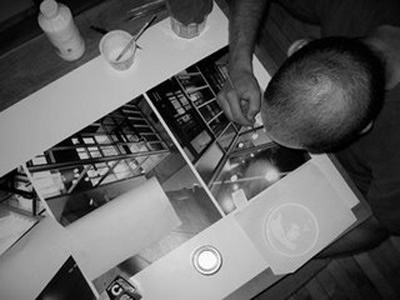 Sketch in progress for “Current Tendencies: Ten Artists from Wisconsin” to be exhibited at the Haggerty Museum of Art in March.

They are also scheduled to exhibit in March in “Current Tendencies: Ten Artists from Wisconsin” at the Haggerty Museum of Art. 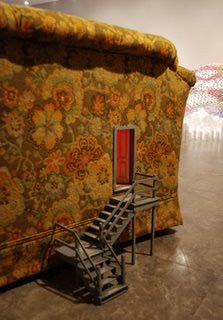