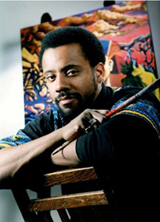 Alumnus Brad Anthony Bernard ’93 (Painting) lives his passion for the arts – through his profession as a college art professor, as an award-winning fine art painter and WAMI-winning funk music performer, and, most recently, by envisioning and organizing Milwaukee’s first Community Arts & Funk Festival on September 18 at the Marcus Center for the Performing Arts.

Bernard sees the festival as a catalyst for building unity and strengthening the community through the multimedia works of a broad range of local and regional urban visual artists, and a celebration of the performing arts.

“As an artist/educator and arts advocate, I believe that visual and performing arts awareness and education are key to any person developing a broad sense of culture, identity and creativity,” said Bernard, an assistant professor of art at Mount Mary College who earned his master of fine arts from the University of Mississippi, Oxford. “Contributing to the arts can heal the wounds of a community, while providing an opportunity for many to enjoy and express creativity in its most vibrant forms.”

“My own start in arts advocacy began at MIAD, where a great sense of community and camaraderie led me to connect with the now defunct Inner City Arts Council.” From there, he said, he became involved with Arts Reach Wisconsin and Very Special Arts Wisconsin.

It his hope, Bernard said, that with the ending of several programs that served the city, and the closing of Milwaukee’s Black Holocaust Museum, “the Community Arts & Funk Festival will revive some of our community’s vibrant past times and bring a lively end to the city’s summer festivals.”

There is probably no better fit than Bernard to organize and direct the event. He has exhibited at the juried Celebration of Community Arts Festival and the Crostie Arts & Jazz Festival in Milwaukee, and Cleveland, Mississippi, respectively, winning awards that include Best of Show.  He also has won a Wisconsin Area Music Industry (WAMI) award as a funk music artist who has performed throughout Milwaukee.

Open studio artists, who will engage children and adults in interactive projects, include celebrated Milwaukee artist Reginald Baylor, the Pfister Hotel’s first Artist in Residence; MIAD alumnus Michael Nolte (’81); and Milwaukee artist Della Wells. Many other artists will participate in the open air gallery, both emerging and established artists. Live music performances will be provided by Fallllen, Urban Soul, Iberia SoulSinger and e’Lectrick Warbabyz. Community and neighborhood organizations will also raise awareness of their programs and services in support of the community.

For more information about the festival and its artists, click here.