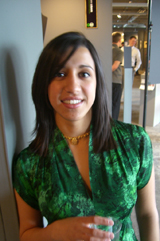 As creative director, designer and animator, Nadia Husain ’07 (Communication Design) created the official animated music video for Golden Artifact by Sleepy Sun, an up-and-coming San Francisco psych-rock band that will use the video on their next promotional DVD and on their website. The video also premiered on NME.com , an online magazine for music.

Husain completed the project with 3D artist and friend Edward Tasick “for fun,” outside the realm of her commercial freelance and documentary film title work in New York City. She began her career with an ambitious summer internship with New York-based company BigStar between her junior and senior years at MIAD. After graduation they hired her, where she worked for two and a half years as a designer and animator.

BigStar was recently nominated for a Cinema Eye Award for Excellence in Graphic Design for their work on Food Inc, a documentary for which Husain did the opening title sequence.