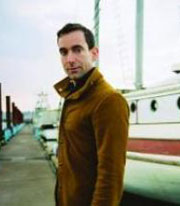 One of the most acclaimed graphic novelists of today – Craig Thompson – spoke at MIAD Tuesday, November 16, about his latest novel, Habibi. The talk was arranged through a partnership with Boswell Books.

“To read Habibi is to sink into the sensuous arabesque patterns that decorate its pages. Steeped in the imagery and storytelling traditions of the Muslim world, this densely layered love story is as grand and sustained a performance as any cartoonist has published…. Thompson’s fluid, evocative artwork is pretty miraculous too,” Time Magazine reviewer Douglas Wolk writes.

According to Habibi‘s website, “Sprawling across an epic landscape of deserts, harems, and modern industrial clutter, Habibi tells the tale of Dodola and Zam, refugee child slaves bound to each other by chance, by circumstance, and by the love that grows between them. 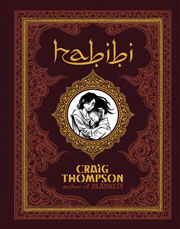 “At once contemporary and timeless, Habibi gives us a love story of astounding resonance: a parable about our relationship to the natural world, the cultural divide between the first and third worlds, the common heritage of Christianity and Islam, and, most potently, the magic of storytelling.”

Thompson, who attended MIAD and was raised in central Wisconsin, won two Eisner Awards, three Harvey Awards and two Ignatz Awards for his graphic novel Blankets, which is considered by some to be one of the best graphic novels published in the last decade. Other titles by Thompson include Carnet de Voyage and Goodbye, Chunky Rice.

Read reviews of Habibi from National Public Radio, the Washington Post and the Guardian.