In our current divisive social and political landscape, the newest exhibit at the Milwaukee Institute of Art & Design (MIAD) asks viewers to do what lately seems rather difficult: feel empathy. “Humanly Possible: The Empathy Exhibition” is on view in MIAD’s Frederick Layton Gallery January 12 – March 10. The public reception is Friday, January 19, 5 – 9 p.m. on Winter Gallery Night.  “Humanly Possible: The Empathy Exhibition” is sponsored in part by the Mary L. Nohl Fund of the Greater Milwaukee Foundation.

“The best way to avoid empathy is to avoid sensorial contact,” says exhibit curator John Schuerman. In this exhibit, viewers cannot avoid such contact. Instead, they are immersed in the works of 12 artists who have varied perspectives. While internalizing the experiences of others through art, viewers are challenged to engage their potential for empathy, and ultimately decide whether to exercise it. 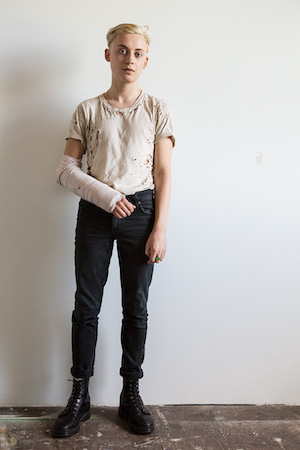 Participants include seven artists from the exhibit’s original Minneapolis run and five new artists, like recent Mary L. Nohl Fellowship winner Lois Bielefeld of Milwaukee. Her photography and digital media work explores the power and complexity of gender identity. Raoul Deal, also of Milwaukee and new to the exhibit, displays large-scale woodcuts that address the difficulty of celebrating one’s Mexican heritage in a society that can be hostile toward immigrants. Work by Juliane Shibata, Tina Blondell, Inna Valin, Chase Boston, Christopher E. Harrison, Nooshin Hakim and Peter B. Nelson (all from the original exhibition) and Liza Sylvestre, Gudrun Lock and Sue Coe (new to the exhibition) is also on view.

MIAD’s galleries are free and open to the public, Monday through Saturday, 10 a.m. – 5 p.m. Free gallery tours are available at miad.edu/gallerytours.